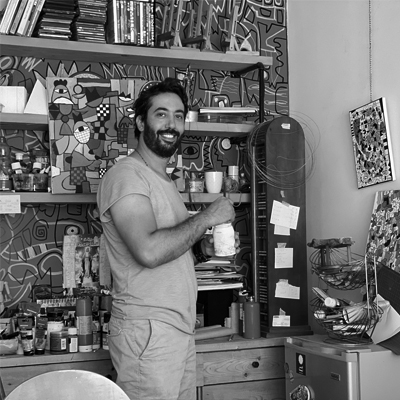 Ihab Ahmad, graduated in Visual Communication from the Lebanese University. He also took part in several workshops in silkscreen printing, painting and drawing. In 2016 he founded the Beirut Art Studio, a space dedicated to teaching art to children and adults. Ihab’s work is diverse. He likes to work with different materials; he creates metal and wood sculptures. Ihab developed a symbiotic relationship with his intriguing natural symbols such as fish, eyes, trees, and man-made symbols like patterns and geometric forms, all of which emerged as an intense and bright abstraction. This connection is entrenched in his determination to defy his childhood memories of war. His joyful art and affinity with color became a refuge as well as a powerful message of optimism. Every work has the potential to reveal the artist’s psyche and ultimately transcends it. The symbols elaborated on his canvas trigger the imagination of the viewer, a dialogue with the surreal, and an open ended horizon of contemplation and decoding. Ihab had several exhibitions in diffrent parts of the world which includes Qatar, France, Italy, Hong Kong, Lebanon and Egypt.

Ihab is influenced by Paul Klee’s work (1940-1879) who said : “Art does not reproduce what we see; rather it makes us see.”
MEET THE ARTIST VIEW COLLECTION